‘In your world, do black and white correspond to good and evil? Is blue the color of the clergy? Does a six-color rainbow flag indicate that you’re a member of a specific minority group? Is there an impossible, rarely glimpsed color associated with magic? Are purple dyes a symbol of royalty due to their rarity and expense, as in the ancient world?

‘In your world, what is the cultural significance of “Colors“?’

Excerpt from ‘Plans for the restoration of the mural at the Achawa Defiladzka Station’, 1,997th year, Insulan Calendar, by Tadeusz Kozlowski

While colour is an emotive issue for political reasons, its spiritual and folkloric resonances must be considered paramount in any fair depiction of national costume and mystical energy. The ribbons of the maypole design thus represent the four colours of angelic manifestation as well as having provincial significance, where they are an inescapable part of national culture.

Missing from this list is Galtargh, which has historically taken the green of Lisak-Frey as the predominant colour in its national life. However, representing the province in this work of art means we need a fifth colour to add to the maypole. My instinct is to go for a yellow ribbon to symbolise the rising sun in the east, coupled with the orange setting sun motifs evidenced in the folklore of the western province of Brest. 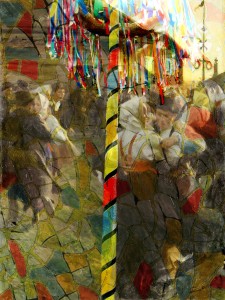 Sketch for the Mural

Political considerations mean that we need to tread carefully with the costume of the dancers we intend to depict. Provincial symbols were misappropriated by the nationalists and imperialists. It goes without saying that the pre-revolutionary flag, the single gold star on a blue field, must not appear in the design. Our emblem, however, the revolutionary five red stars on a white field can be easily inlaid as a replacement.

Given the preliminary sketches received, care must be taken to make sure masculine folk dress cannot be confused with the pre-revolutionary militias, who used national colours to their own ends in the northern provinces. Thankfully, neither the navy coats of the Breston gendarmes, nor the brown coats of the Galtarai corresponded to a national emblem. However, the blue-grey of the Allemundischer constabulary should be avoided, and the men representing Krovotka and Salvatka should have some other more recognisable marker of their nationality than a red or green coat. It certainly helps that our Commonwealth law enforcement officers wear neutral colours.

Some effort should be made to represent the parts of our Commonwealth where nationalities blend and mix to form new peoples. The vostochni Salvats [Minervan worshippers] and the Dnivki region of Krovot worshippers of Lisak should be included as intertwined ribbons. Humanity is by no means strictly divisible into separate nations. Likewise, the fluttering coloured ribbons of the maypole should intertwine and even merge into a true mosaic of peoples, representative of Insula throughout history as well as in the current times.